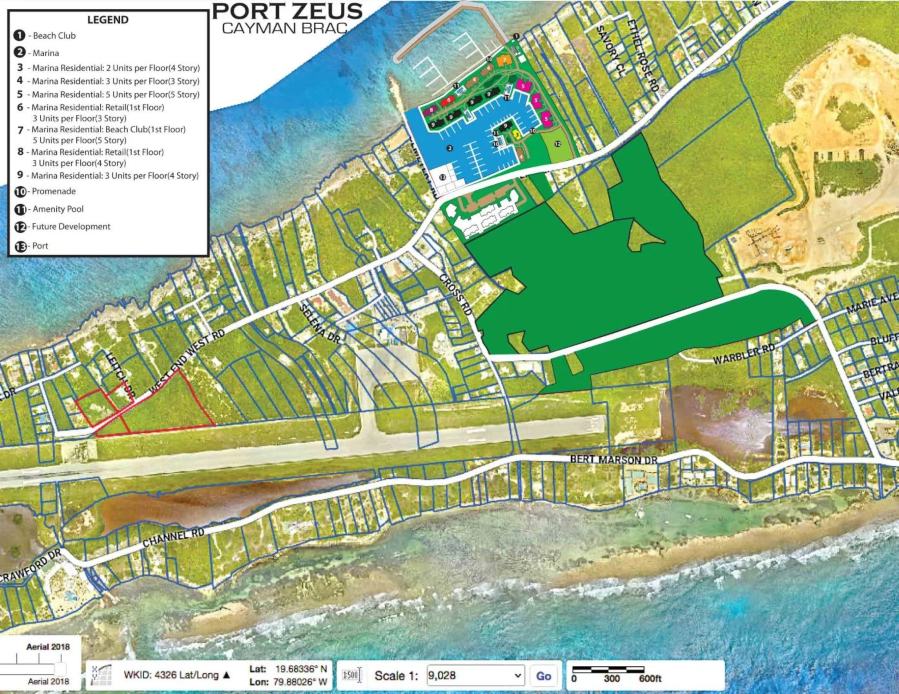 The detailed master plan for a new marina, port and village on Cayman Brac sets out the development details for the community to clearly see, understand, and give feedback on the proposal.

Entrepreneur and long-time Cayman resident Frank Schilling is behind the proposal, which he believes will provide much-needed investment on the Brac and benefit the Cayman Islands as a whole.

During the pandemic and in the aftermath of the sale of his internet-related businesses, Mr. Schilling found he had time to look at the problem of there being no safe harbour on the Brac.

He therefore set up FS Inc., a company he wholly owns, with the purpose of developing the port at Scotts Dock, on the northwest coast, where he hopes to build a sustainable marina-community during the next two decades.

Plans have been inspired by his trips to Greece, observing that islands smaller than Cayman Brac have safe harbours and bustling economies. His proposals, however, will be tailored to an aesthetic for the Brac, and will be moved forward with the community’s wishes in mind.

The name of the development itself has been taken from Greek mythology, in which Zeus is the God of land and sky. A safe harbour and marina are about leaving the moody element of the sea to arrive safely on land.

Port Zeus aims to encourage and promote Cayman Brac as a safe destination for visitors as well as building upon the proud maritime heritage of the Cayman Islands, which is celebrated in the national motto ‘He hath founded it upon the seas’.

The ambitious plan is to excavate more than eight acres of land next to Scotts Dock to create an inland marina and an enclosed harbour that could accommodate a small fleet of fishing or pleasure boats.

Mr. Schilling’s goal is to construct a facility that is small enough to be in keeping with the community, but large enough to provide long-term utility.

Scotts Dock is the preferential location for such a development as it will have minimal impact on the fringing reefs, has deep water close to shore and should require limited offshore dredging. It will be set adjacent to the current Port Authority anchorage area.

The marina will create a new amenity for the Sister Islands that can provide security for a fleet of vessels, an alternative safe access for small cargo ships and activate government lands for potential port activity.

Port Zeus is intended to be a full-service marina with power, water and a state-of-the-art sewerage system. There will also be full-time security, marine fuels, bulk ice, chandlery services, welfare accommodation and other amenities to meet the needs of the seafaring/maritime community.

The marina is also intended as a catalyst to create spin-off businesses such as watersports companies, restaurants and other tourism enterprises.

The facility could also allow a car ferry to run between Cayman Brac and Little Cayman, helping forge closer links between the two Sister Islands.

In line with Cayman Islands Government support of small and micro enterprises, it is hoped that Port Zeus will be the spark to ignite just such a new marketplace on the Brac.

The modest harbour will be sympathetic to the environs of Cayman Brac, with the aim of eventually making a small fishing village/community, spreading over approximately 100 acres.

In Mr. Schilling’s vision, this would be similar to many Mediterranean coastal villages where the harbour is the focal point, around which a community grows and thrives. It would have a central plaza, shops with apartments on upper floors, restaurants and places to stroll, sit in the shade and linger awhile.

The aim is to be low key, with a development of a few hundred homes/apartments springing up in phases over several decades.

In time, the marina and village would take on its own Caymanian character, hopefully showing the best of the island’s personality and be a stepping-stone for new visitors to experience the attractions of the island.

Proximity to Charles Kirkconnell International Airport would also make Port Zeus an ideal embarkation and provisioning location for yachting in the future, as this global market is expected to expand.

Another benefit of the marina would be to allow weekend tourism from Grand Cayman, with boats able to reach the Sister Island in a three-hour trip. The marina facilities could also encourage sport and commercial fishing, and be central to fishing tournaments, which are popular in Cayman.

In terms of employment, not only will Cayman Brac companies and workers be given preferential consideration for the construction phase, but long-term employment will be created through jobs at the marina and the associated businesses which are intended to be located there.

Unlike other developers on-island who create projects to lease, FS Inc. aims to share and sell pieces of its master plan to bring in other stakeholders from the community.

Mr. Schilling has a deep fondness and respect for Cayman Brac and has been a regular visitor for 20 years, hoping to eventually retire on the island.

“It feels soulful and good and under-appreciated, and we would like to try to enhance it at a pace that the community will accept,” he says. “In an island of 1,500 people you can’t impose your vision – everything will happen at the natural pace and progress that is good for the community.”

Following the publication of the Port Zeus master plan, the next step will be to submit planning applications to the Development Control Board and a coastal works application to Cabinet before any work can begin.

Community feedback about the proposed development is welcomed. Questions and suggestions should be emailed to info@portzeus.ky or visit portzeus.ky.