Within the first four weeks of cruise lines returning to the Cayman Islands, 21 ships carrying up to 74,208 passengers are scheduled to arrive, the Ministry of Tourism confirmed on Tuesday. The Disney Magic, with a maximum capacity of 2,700 passengers, will be the first ship to arrive when the cruise ban is lifted on 21 March. 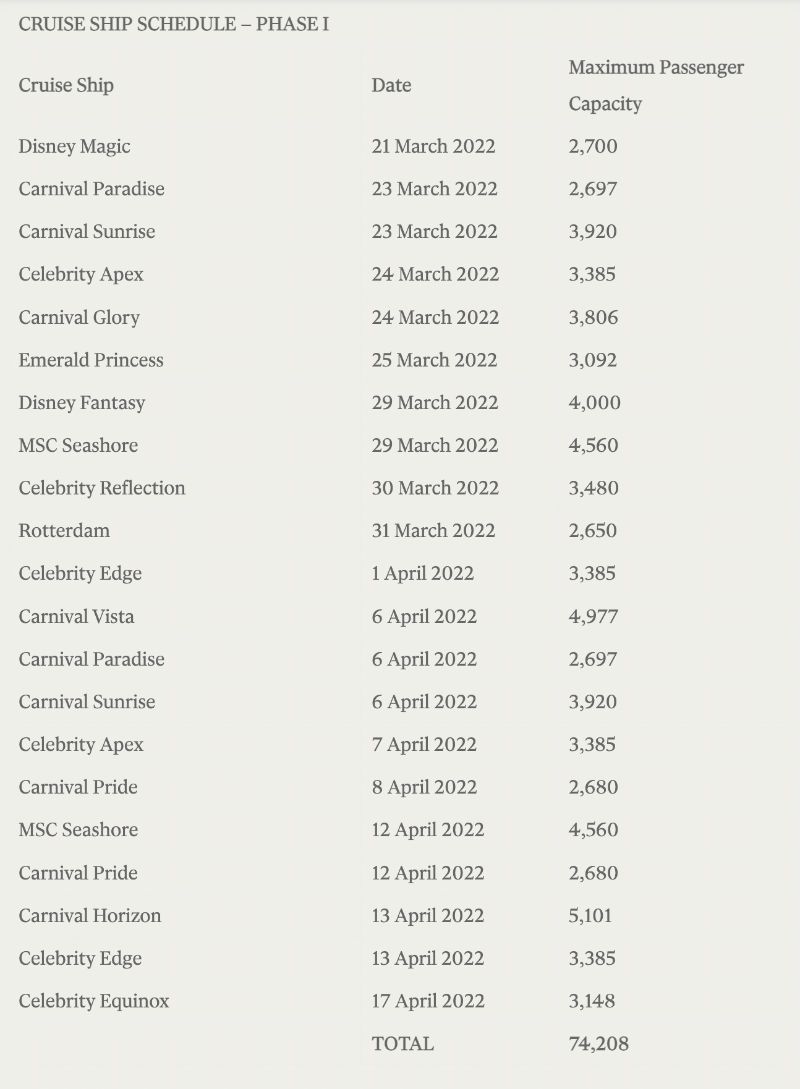 According to the schedule of cruise arrivals released by the ministry, the maximum number of ships arriving on any one day will be three, on 6 April, while on eight separate days, only one ship will be stopping here.
The largest ship to arrive will be the Carnival Vista, which has the capacity to carry 4,977 passengers.

However, Tourism Minister Kenneth Bryan told the Compass that while the maximum capacity for passengers is listed in the schedule, not all ships will be carrying that many on board. “Industry trends are going towards 70-80% of capacity,” he said, “so those numbers don’t necessarily reflect the actual [passenger load].”

He said once Cabinet finalises the regulations regarding the health and safety protocols for the ships, passengers and crews – likely to be done next Tuesday – a press conference would be held to release more detailed information. The resumption of cruise tourism in Cayman is being done in two stages, with the first phase lasting from 21 March to 17 April.
In a press release announcing the cruise arrival dates, Bryan said his ministry was releasing information on what cruise ships would be arriving, and when, at this point because he wanted to ensure that industry partners and stakeholders were provided “with as much time as possible to plan for the return of cruise passengers and prepare their operations accordingly”.

He added, “Cruise tourism makes up a significant portion of our tourism industry and the return of cruise passengers will bring welcomed relief to many Caymanians who depend on this industry for their livelihoods. Every cruise call that brings passengers to our shores is helping to support Caymanian employees and business owners that have been hard hit by the COVID-19 pandemic.”

The Cayman Islands government has been in talks recently with the cruise industry about plans to reopen the islands to cruise passengers, and representatives from the Florida-Caribbean Cruise Association and various cruise lines were here last month for face-to-face discussions.