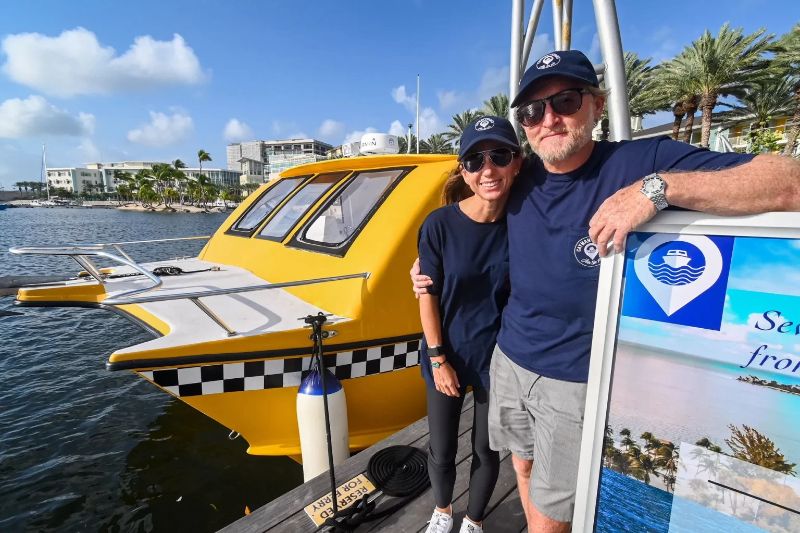 A handful of commuters bypassed rush-hour traffic in favour of a breezy 15-minute boat ride from Newlands to Camana Bay, Monday, with the launch of a new ferry service.

Cayman Ferries – the first business of its kind on the islands – hopes to take cars off the road at the busiest times of day and save motorists the frustration of crawling at walking pace in hour-long tailbacks from the eastern districts.

“We’ve been suffering in traffic for quite a while so we decided to give this a try and see if it makes for a less stressful start to the day,” said Evelyn Tibbetts-Farrar, who boarded at the Newlands dock with her 6-year-old daughter Ava.

“It has been really smooth and extremely fast and efficient. I think it’s something we could potentially do on a regular basis,” she said.

Ava attends the Cayman International School and her mother works close to Camana Bay, so the journey works perfectly for them. Usually it takes them an hour to travel from their home in Newlands in time for the school day.

Ava said the journey was less boring than travelling by car and she would recommend it to her school friends.

Ariel Thompson and her friend Shynecka Williams both work in Camana Bay and were trying out the ferry for the first time.

Thompson, who lives in Savannah, said, “It is a beautiful experience, just being able to take in this view and knowing there are no cars in front of me. It’s really exciting.”

She said she actually had to leave a little earlier than usual because of the ferry schedule. But the stress-free commute and the chance to have a coffee and breakfast at Camana Bay before her 8:30am start made it worthwhile.

Williams, who drove 10 minutes from Prospect to catch the ferry at the Newlands dock, said it normally takes her 45 minutes to drive to work.

“I pulled out in the opposite direction this morning and I just watched all the traffic mounting and thought, ‘Thank God, that’s not me.’”

Cayman Ferries is owned and operated by husband and wife Daniel Petts and Claire Pettinati. The couple, who live in North Side and used to get their own children to school by boat, believe Cayman’s waterways are under utilised as a resource for transport.

Petts said he was hoping to see a few more faces on board in future as the ferry becomes more well-known and well-established. He said further routes could be added if it becomes popular.

“We’re hoping that now it’s up and it’s operational and people see that it’s a reliable service that they take the jump.”

He said people were able to answer emails, send a few texts, read the paper and arrive at work in a relaxed mood and on time. The challenge is for people who don’t work at Camana Bay or at least close by.

The business is hoping to partner with others to create bus connections for onward travel. In the meantime, they believe there are enough people who live in Newlands, Savannah and Prospect that could fill the 34-seater ferry to Camana Bay every day.

The service leaves Newlands Public Dock at 7:15am and departs Camana Bay for the return leg at 5:15pm.